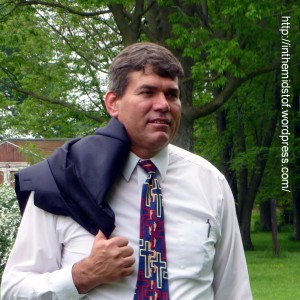 I am elated to introduce my guest blogger, husband, and pastor: Don Winters. Don pastors at First Baptist Church of Carthage, is a CARE Board Member, and is currently trying to raise money for Hope 2 Liberia by sponsoring a one-mile run/walk on July 20. Don writes a Midweek Connection for his congregation in hopes of building a bridge between his sermons on Sunday mornings and real world living throughout the week. The following is this week’s Midweek Connection. I pray you find it thought-provoking.

The world around us gets a picture of what God is like by looking at the church.

What kind of god do they see?
Is it the god of the deist who is unwilling to intervene in the midst of horrible suffering?
Is it the legalistic god that is just waiting for you to mess up?
Maybe it is the “anything goes god.” This god’s only desire is for you to be happy right now no matter what it ultimately costs you and those around you.

None of these are the God of the Bible.

Which God are you revealing?

You may connect with Don Winters through facebook here.
If you live near Carthage, IL or Muncie, IN and would like information on the Liberian Mile, click here. 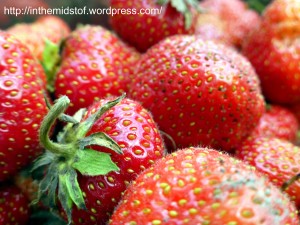 Our strawberries are almost done for the year . . . and I’m grateful. I’ve spent numerous hours weeding, picking, cleaning, and cutting strawberries. I’m ready to move on to raspberries or peaches. However, I am glad I stayed the course ‘til the end because the last batch yielded the biggest and best tasting strawberries of the season, something we would have missed if I had quit early. Besides the immediate benefits we reaped, we blessed others and will enjoy the fruit of our labor over the winter with frozen strawberries and jam.

Unfortunately, I tire of repetitive tasks easily. I was reminded of this as our school season wound down. Inevitably, during the last month, I fight the urge to scrap everything and call it a year. Thankfully, I chose this year, as in the past, to lean in and drive through. 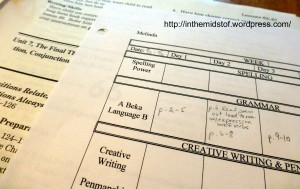 Typically I am re-energized as I prepare for the next year. Fresh books. White paper. Sharp pencils. But as I opened next year’s boxes and faced my 15th year of homeschooling, I felt dread in place of excitement. The harder curriculum equates to longer days. And, frankly, I’m drained. I’m, well . . . over it (at least today). I’m ready to move on to the next phase of my life, whatever that may be. At the same time, I recognize as well as I can that our family is called to homeschool. So I must continue for, probably, eight more years.

In the midst, I trust God will provide the strength, determination, and perseverance necessary to not only continue the homeschooling journey, but enjoy it as well.

“Therefore, since we are surrounded by such a great cloud of witnesses, let us throw off everything that hinders and the sin that so easily entangles. And let us run with perseverance the race marked out for us, fixing our eyes on Jesus, the pioneer and perfecter of faith. For the joy set before him he endured the cross, scorning its shame, and sat down at the right hand of the throne of God. Consider him who endured such opposition from sinners, so that you will not grow weary and lose heart.” (Hebrews 12:1-3)

What course are you on that you are weary of?

What keeps you going? 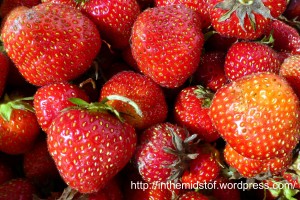 To fathers who are now grandfathers,
Happy Father’s Day

To fathers with hearts that soar over their child’s accomplishments,
Happy Father’s Day

To fathers with hearts that ache over their child’s failures,
Happy Father’s Day

To fathers who play ball with their children,
Happy Father’s Day

To fathers who struggle to maintain food on the table,
Happy Father’s Day

To fathers who go to bed weary,
Happy Father’s Day

To fathers of an adopted child,
Happy Father’s Day

To fathers of a foster child,
Happy Father’s Day

To fathers who tell their children “I love you unconditionally,”
Happy Father’s Day

To fathers who lead their children by following Christ,
Happy Father’s Day

To my father who is a source of encouragement, strength, and wisdom,
Happy Father’s Day 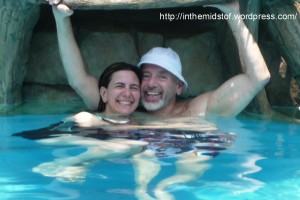 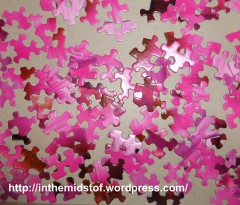 Have you noticed how puzzle pieces, when first poured from the box, look like a disorderly mess that will never come together? Each piece seems to be a puzzle in and of itself. This is especially true if there is one particular color running throughout the puzzle, as was the case for me last night. It was a collage of flowers, most of them pink. 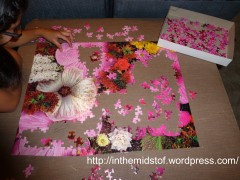 What I observed specifically while piecing together this puzzle was: the more I studied the box, the clearer each piece became. By the time I was halfway through I could easily distinguish which flower each piece belonged to:  This solid magenta piece belongs at the top; this feathery fuchsia piece fits with the side flower; this pale pink piece with rose lines goes on the bottom left. Of course, with this information, finishing the puzzle was easier.

Isn’t that the way it is with the Bible? I have heard it referred to as God’s instruction manual. I believe the Bible is so much more, but that name is suitable. The more I study this Manual, the easier it is to see how the pieces of life fit together. The category each event matches becomes obvious: That behavior is sin; that action reflects truth; his ministry represents God’s justice, she is showing compassion; that family is walking in obedience.

The question then becomes: what will we do with this information? Will we study God’s Word more thoroughly? Will we apply His truths in the midst of our puzzling lives? 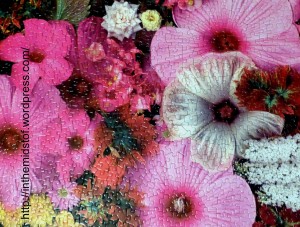 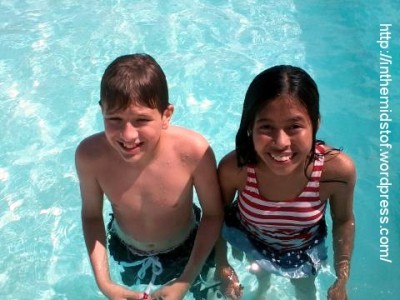 During the summer my children and I try to spend an hour or so at the pool several days a week. Many times I find it difficult to desert my chores to accomplish this task. Ah, therein lays the problem—I think of it as a task, one more item to cross off my list of to-dos. In the midst of my hurried day—between picking strawberries and cooking supper—it’s hard to stop and sit still while my children play with their friends at the local pool.

Yet the break in my routine typically refreshes me. It’s a marvelous excuse to soak in the sun and catch up on my reading or prayer time. My thoughts are forced to slow down and focus. My body has no choice but to relax. And my Spirit finds time to connect with the Lord. It’s a time to re-group.

Often, I find myself delighting in the laughter of the children, the splash of the water, the colors of the swimsuits, and the joy evident on the faces of my children. And I am thankful.

With this renewed attitude and perspective, I am able to dive back into my chores with more energy.

Does your daily routine allow for a break?

Do you find a slight break in your day refreshing?

In Francis Chan’s book Crazy Love, he refers to interactions he encountered with others after feeling led by God to make a radical change in his life.

When I returned from my first trip to Africa, I felt very strongly that we were to sell our house and move into something smaller, in order to give more away. The feedback I got was along the lines of “It’s not fair to your kids,” “It’s not a prudent financial choice,” and “You are doing it just for show.” I do not remember a single person who encouraged me to explore it or supported me to explore it or supported the decision at the time.

Although I find this sad, it is not surprising. Even within churches, there are norms, standards, boundaries created. One does not simply downsize for the sole purpose of giving away more money.

Don and I ran into a similar situation while trying to bring Melinda home from Guatemala. A year and a half into what was supposed to be a four to six month process we still faced obstacles. While not everyone discouraged us, we felt some within Christian circles believed we should cut our losses and move on.

In certain areas of life the differences between the church and society in general is almost indistinguishable. Eating is one of those areas. I have battled food issues since puberty; but I have learned not to tell people when I am trying to eat well or attempting to eat less. Inevitably I will hear, “Oh, you look great. You don’t need to worry about losing weight.” I stopped attending a Bible Study because the hostess was offended if I did not eat dessert. The temptation to cave into her (many) offers was too hard to resist (even though I knew I would be sinning if I ate it).

Most of us have been on the receiving end of such statements; however, we feel justified when we are the ones making the assertion. What I think we fail to understand is we can be a stumbling block to what God is trying to accomplish in someone’s life. It may be we don’t grasp the call or we fear he is stepping out of God’s will simply because it’s not what Christians normally do.

The typical churchgoer will not ask me why I am choosing to eat differently. If she did, she may find that food can be an idol in my life. She may also find I need encouraged and prayer because my flesh is weak in this area.

Not every Christian is called to sell his/her house, adopt or eat differently. However, we are asked to live by God’s standards, not the world’s. Therefore He may request us to make changes that appear extreme.

Shouldn’t church be the place where we are encouraged to follow God no matter the cost? Shouldn’t we feel comfortable, dare I say excited, to share God’s next adventure for our lives with those who claim to love Him wholeheartedly?

Maybe before we speak, we should prayerfully consider if it is a time to encourage a fellow Christian to step out in faith.

Let me be the first to encourage you to pursue with abandon God’s directive even when it appears radical.

Who does God want you to encourage today? 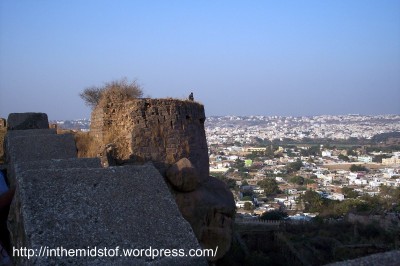 For behold, the kingdom of God is in your midst.

You have my permission to reprint what you see here. However, I ask that you give full credit and a link back to this blog. Thank you.

DISCLAIMER: I don’t sell ad space for this blogsite

Wordpress places ads on this blogsite to cover their operating costs. I cannot see the ads, do not know what they are selling, and do not make money from them.